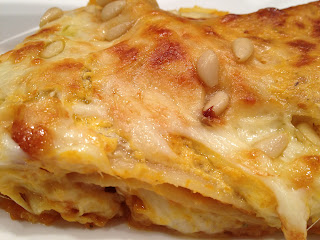 This is one of my favourite recipes.  I often vary it greatly and have outlined some options below the recipe.  Adding other veggies or changing the "white sauce" are all good variations.  You can definitely make it lower in fat with some of the variations too - eg using low fat ricotta and less mozzarella and Parmesan, roasting the veggies in just a tiny bit of oil spray instead of liberal amounts of olive oil.  I usually do make it lower in fat when I make it for a regular family dinner, but this version is the tastiest and most rich and pumpkiny in my opinion.

Ingredients:
- Lasagna sheets - I either use the dried instant ones or make my own fresh - I don't think the "fresh" from the supermarket are as good for this recipe (although I've used them several times). I like the thickness of the dried, instant ones and the al dente texture which you can't really achieve with fresh pasta.
- 2 very large pieces of pumpkin - I usually use 2 different varieties - this time I used Kent and Grey.
- 3 whole garlic cloves, unpeeled
- 12 fresh sage leaves, washed and dried
- good quality olive oil
- a few good handfuls of freshly grated, good quality Parmesan cheese
- 300 grams of grated mozzarella
- 180 - 250g mascarpone - (I had a 250g tub which I'd already used some of for another recipe. If you're only using the mascarpone for this recipe, then you use the entire tub so as not to waste it.)
- raw pine nuts

Method:
- preheat oven to 200 degrees Celsius
- peel and cut the pumpkin in to large chunks and scatter on two oven trays lined with baking paper
- add the garlic cloves (unpeeled), drizzle with olive oil and sprinkle with sea salt and ground pepper & roast for 20 minutes 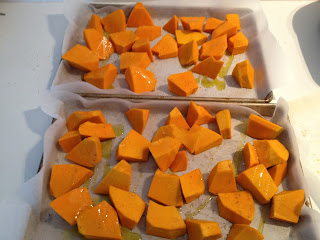 - Turn the pumpkin around, add the sage leaves and drizzle with more olive oil if needed
- When the pumpkin is well roasted and the sage is crispy, remove from the oven and turn it down to 180 degrees Celsius 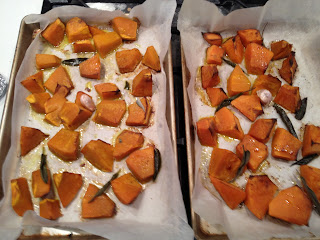 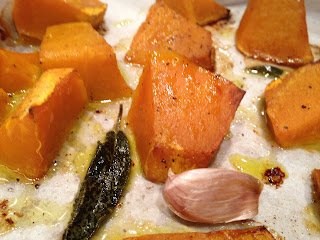 - set aside the crispy sage leaves 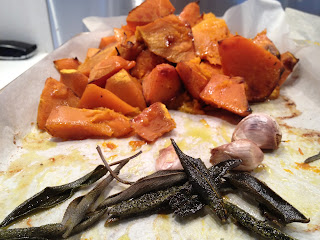 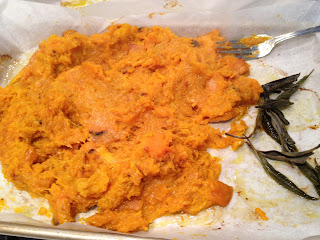 - finely crumble the sage leaves and mix through the pumpkin 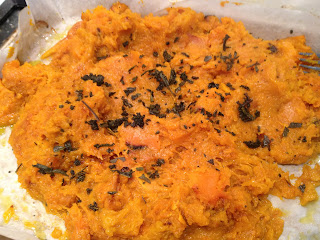 - *important* Add some water to your mashed pumpkin so it's runny. You need the extra moisture so the lasagna sheets have enough liquid to cook them through and so the final dish isn't too dry. I used probably about 180mls this time as I used dried instant lasagna sheets.  If you're using homemade fresh lasagna sheets then you'd only need to add a little bit of water to loosen the mixture.  You can see the difference in texture in the above photo and the one below.
- divide the pumpkin in to 3 decent sized portions and 1 smaller, half sized portion
- spread a layer of the pumpkin mixture on the bottom of your dish and top with one layer of lasagna sheets 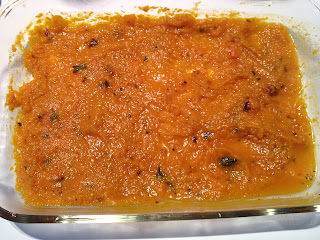 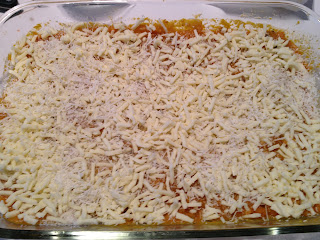 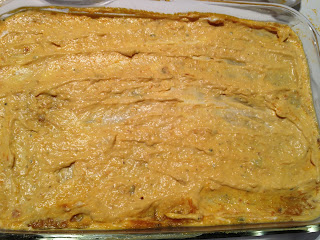 - top with lots of mozzarella and Parmesan, drizzle with a bit of olive oil, cover with baking paper and foil and bake in 180 degree oven for 45 minutes 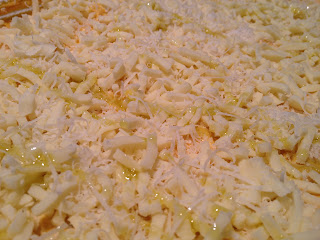 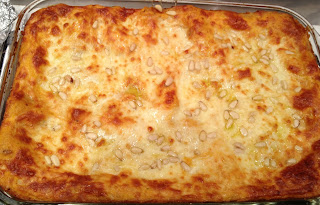 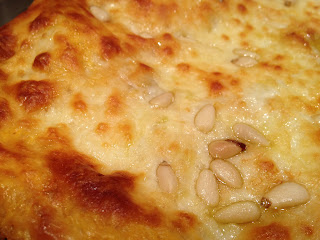 - serve hot on it's own or with a rocket salad.  It's even better the following day and it freezes very well. 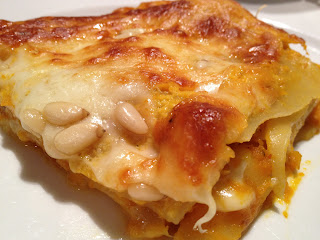 
I hope you try this and love it as much as I do!